A downloadable game for Windows, macOS, and Linux

A surreal fantasy RPG inspired by roguelike games and interactive fiction. Become a magician in the world of Phenomedom! Escape from prison! Learn rituals! Collect paragraphs! Converse with conjoined twins! Do battle with wild and original enemies, including pookahs, imp-imps, and boogadah dream porridge. Altogether there are dozens of areas to explore, hundreds of  original monsters to slay, and nearly two hundred citizens brimming with  lies and idle gossip.

There are also some puzzles, and a fair number of shrewd (lewd?) jokes. Mild  psychotic interludes and hallucinatory episodes are also featured.

I'm thrilled to see this game here and active. I recently uncovered version 1.0.0 in some of my old files. I remember buying it physically with a bag of goodies at, I think, a DragonCon many years ago, probably around 2003 or 2004. Sadly all the physical bits have long disappeared in various moves. Back then I never really got far but I look forward to diving into it again.

I was playing this and loving it years ago (still got it installed actually, because I really would like to go back and finish it) but eventually hit a spot in the magic meadows where I kept getting basically instakilled by a certain trap.  The trap was one that made you hallucinate and then while that was happening you would usually get mobbed by very powerful demons.  I wonder - does anyone know of a way to avoid or disarm this trap or survive the hallucination effect without painstakingly checking every step you take for traps?  This trap basically killed the game for me as it meant that on that map I was pretty much guaranteed of just dying with no way out when (not if), I had the bad luck to hit these traps :(.

Some tactics for avoidance:

-an early Logos ritual, Divine Objects, can also detect traps. The higher your Logos, the better it works

-a higher Outdoors skill can help you find traps in the wilderness. Its also useful for hunting plants and mushrooms

There is often more than one place available to explore, so sometimes just leaving a difficult map and returning when you are more powerful is the best approach.

Thanks Nathan.  I was afraid of that.  I guess I'll try it again with a bigger focus on detection.  My prior attempts to avoid solely by detection got tedious because these particular super traps are everywhere in that meadow and the place is already confusing and hard to navigate (appropriately enough in context)!  You spend a lot of time stumbling around in there!

As for being stronger, I am unsure if I can be much stronger in that spot since I had explored extensively, including Divinity itself and that seemed to be the only way forward (from memory).  My character was bad-ass and able to handle most things in the normal course of play easily enough.  The issue was that these demons seem to be really really powerful, and suddenly occurred in huge numbers.  If the trap spawns larva on top of my head, no problem I can survive even a horde that has surrounded me easily, but the demons... Yoiks.  Even individually they are a handful and encountering a dozen was a death sentence, particularly since they popped in and surrounded you, so you could not necessarily bottleneck them, you just got swarmed.

Is that trap prevalent (as opposed to occasional) throughout the rest of the game, or is it mainly the magic meadow where it is is prevalent?  I encountered it in prior areas but rarely until the magic meadow area.  If it is just a matter of painstakingly picking my way through the meadow and then only occasionally seeing it again, it is worth the effort!

(But I think I'll go and give it another go now anyway, maybe epiphany will strike!)

Ok and I just reached the Castle of Mirrors.  Phew.  Coming back to this after a few years is confusing :).  Also I think I may have a Level 4 Battle spell 'Banish Demons' that may also get rid of the traps effect that I have not yet tested...

Also, the packaged JRE seems to be no longer working.  I downloaded the latest JRE and installed that and it worked though.

Ok, so sadly I guess this game goes back into hibernation for a few more years.  Over many hours I progressed through the mazes of the Castle of Mirrors and reached level 3 and there encountered a number of monsters named 'Shimmering Wall'.  This monster applies the same effect as the trap - applies the effect that almost always summons demons.  It does it on EVERY hit.  It also looks like a normal wall, so it is very easy to stumble right into it.  Yay.

So I tried to cast my ace-in-the-hole banish demons spell and it won't let me - 'Ah, but the colours are too beautiful for that'.  I lasted 5 rounds by using a gleaming wand, but nope, being immediately surrounded by endgame monsters is too much even for my L19 Chaos Warrior Mage. I honestly see no way to survive this attack/trap once it fires.  You can't outfight it, you can't run, you can't use any magic to help yourself, you can't resist it, you can't heal your way through it, you can't dispel it, and you cannot hide/survive till it wears off.   So *Boom* guaranteed death.

If anyone ever figures out how to handle this trap/effect I'd love to know  how!

Hi, as before I don't have any silver bullet, only suggestions that might help -

-there's an early Logos spell, Detect Enemies, that might help you identify the wall beforehand. A higher perception skill will also help.

-a dreamcoat grants immunity to hallucinations, if you can find one

-a rosewood staff can banish daemons, again, if you can find one

-a lot of daemons are particularly susceptible to light

It does sound like you've built a powerful character though. If you haven't tackled the sewers yet, or the observatory, I imagine you are strong enough to handle those places, where hallucinations and so forth are less of a theme.

I played this game many years ago and often describe it like a fever-dream to other roguelike enthusiasts.  Its relative obscurity, hand-authored nature and the lack of supplementary info (player wiki) make it a particularly mysterious artifact.  Frustrating at times but very memorable.  Perhaps this time I'll try to play all the way through.

Yes! IIRC there's a configuration panel available from the main menu, from there you can switch to the Roguelike keyset  which remaps to letters for diagonal movement. Hope this helps! Cheers -Nathan

Picked this up from Nathan himself at DragonCon years ago. I still love pulling out my disc and playing through it from time to time.

Good to see this updated--my old version has pretty much broken!

I can't seem to run this, though. It looks like it's expecting a file called legerd.TheApp that it can't find?

I can't reproduce the problem on my (Windows) setup. What OS are you using? When in doubt I'd recommend trying the larger download version (~51 MB) that comes bundled with the JRE instead, it is more self-contained and less dependent on your particular environment.

Thanks for the quick reply! I'm using Mac OS X 10.14.6. When I double-click on legerd_mac.command (in the version bundled with GRE) I get this in the Terminal window:

There are some .jar files I have that I can run so Java isn't completely not working on my computer, but I don't know how things work with the specific JRE. (It looks as though the jre folder has one for linux and one for win32, but not for OS X--is the linux JRE also used for OS X?)

It's also possible that I might be able to use Wine to run the .bat file, if I can work that out.

Glad to see this classic staying available. Is it still possible to get the guidebook and stuff (roguelikefiction link is dead)?

Hi, yes I still have some books, although we'd have to figure out payment. $20 plus shipping, ($3 for US/CA, otherwise more). Paypal or a personal check would work.  You can contact me nathan.jerpe@gmail.com. Thanks for your interest! Cheers 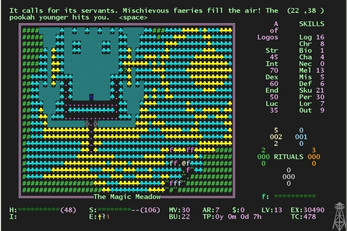 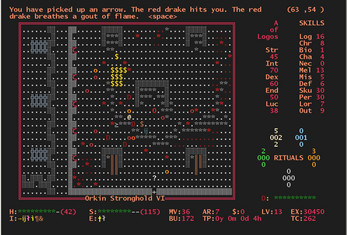 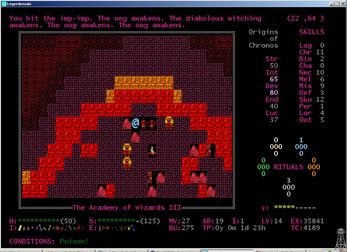 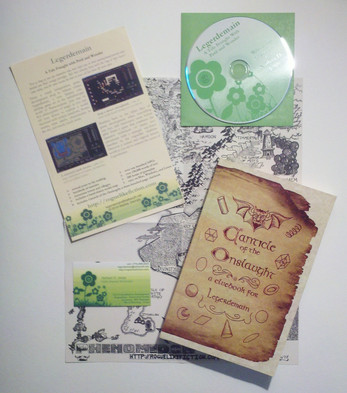